skip to main | skip to sidebar

Jane, Ian, Brian and Theresa have completed (well all accept Ian who did not start due to injury) the Palma Marathon. All survived and are still running. This is our continuing thoughts. Milly has now started her own blog.

Well, over 3 weeks after the back went, it finally seems to be nearly fixed. Self diagnosis? - sacroiliac joint. It subsequently moved into a bout of sciatica but that is manageable with a few strategic stretches as and when required.
I do concede that participating in the Paxton X country whilst in the throes of this pain was not the cleverest idea in the box, and I am sure it would have subsided a bit earlier, had I resisted the temptation to skite about on ice and snow for 4 miles. But there you go. I was rewarded for my stubbornness by a slow time, but on the bright side, I've opened my Borders X Country 'account'.
It is the Berwick leg today, and I am looking forward to it. Feeling a bit fitter, although even short stuff at the moment is leaving my legs a little tired, simply due to lack of training......
Posted by A middle aged runner at 00:41 No comments:

As you will see if you look left. I now have my own blog.
Posted by A middle aged runner at 11:16 No comments:

I'm recovering from a painful lower back/pelvic injury which came upon me suddenly as I ran around Innerwick on 29 December. Anyway, its been a painful week and a half, where even walking was a challenge. I decided to test myself today, as the pain has begun to ease off. Managed 7 miles around John Muir, gingerly watching where my feet went......and expecting a sharp pain in my back if my footfall went awry. All in all it was not too bad, a bit stiff in the back, but no major pain, and just the odd sharp twinge in the back when going downhill and hitting the deck suddenly.
I've decided today's 7 miler is the start of my Edinburgh Mara training. My head is telling me that I am not fit enough to do the Paxton Cross Country tomorrow, but my gut feeling is I would like to get out and give it a go.....hmm. The many weeks of winter weather and lack of mileage has left me feeling that I am not race fit, and the hilly, rough and twisty-turny nature of cross country is probably not the best choice for the old back.
Posted by A middle aged runner at 08:21 No comments:

My running activity has shut down to a 'care & maintenance' basis at the moment, i've barely managed 10 miles a week for the last 3 and the weather and work have just conspired to made things worse. I'd been looking forward to the cross country, but the cancellation of 2 Border meets and missing the Festive Half (unintentionally) made a bad situation worse. Things can only get better as that marvellous pop band D-Ream once said.

Been feeling a bit poorly this week but I need to drag myself out of my misery pit and get moving again.

B
Posted by A middle aged runner at 11:08 No comments:

Thought I might carry on this blog for a while. Running after the marathon has been slow due to sore leg. But ran today and for the first time my leg does not hurt after running which is great progress. Ran with Theresa and Millie through the Winton woods. Very cold but really enjoyable. Millie enjoyed it. I enjoyed it and Theresa persevered. May run Gala on Sunday. Ian running alot, again. Back still sore apparantly but popping pills. Men.
Posted by A middle aged runner at 10:25 No comments:

Some pictures from the Dunbar Running Club Palma Marathon contingent can be found on Flickr either HERE or in the embedded slide show below.
There is a bit of amiable tomfoolery going in a few snaps, partly due to the Dunbar RC silly vest competition, and partly because, err the male subjects are, well, just fools (according to the girls anyway).
Anyway, the poses could have been so much worse. Just disappointing that the girls did not enter the spirit of the competition. Still, the boys had the last laugh, Stelios from Easyjet has just been off the phone about a lucrative contract to commission Ian as the new face of Easyjet - the epitome of efficiency, speed, guile and economy........... 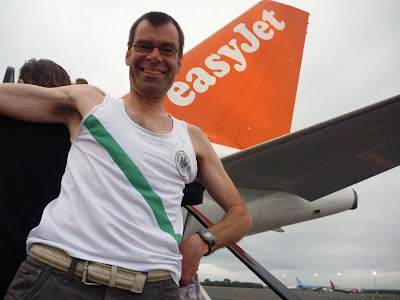 Posted by A middle aged runner at 02:15 No comments:

Theresa here - its been a long while since I've written a blog so in my usual blethering style this one is a bit of a long one. Well guess I'd better give my take on the marathon - the short summary is - "it was hard"
We had headed in to pick up all our info from the expo tents as soon as we arrived in Palma - having had lunch next to the finish line. Things began to feel a bit more real for us all. At this point Ian, Jane, Brian and I were all expecting to run. The next day Ian got up and his spine resembled the leaning tower of Pisa more than a normal upright posture. With spending the day getting advice from Osteopaths in the UK, Jane/Brian and I all trying to pop the pelvis back into place and trying to find an open osteopath/chiropractor in Palma Ian resigned himself to chief support rather than running. He managed to be very supportive and not to show his gutted-ness - I'm not sure I'd have managed to do so well with this if it had been me.
The run itself started at 9am, and already it was warm with the sun shining and threatening to get hotter. We'd worked out our ideal km paces to get the times we were hoping for, and my aim was somewhere between 6.10 and 6.20 per km. The first 10km round the harbour area was too fast but not hugely so at 1.00 rather than 1.02. Then I mentally began to doubt myself as we headed into the town 10km. There had been a few sharp turns and running back on yourself in the first 10km, and through the town it felt a bit up and down hills trying to make up the distance. Jane loved this bit, I didn't. I was drinking tonnes, really thirsty and struggling with the heat and the thought of having to run for another 3 hours was not going down well with myself.
After the town 10km the half marathoners split to the finish, with the marathoners then splitting off for a half marathon loop. I really wanted to stop. I mean really. Without Ian shouting at me to keep going, and the thoughts that I couldn't pull out (a DNF is apparently much worse than a DNS) and really there was nothing wrong with me except my brain. I passed David and Jane B and told them I wanted to stop but kept going. I'd made a deal with myself - once I ran a km in over 7 mins I could pull out and walk back. I didn't ever run one this slow, although a couple of times when walking I broke the 7 min barrier. (Yes I know, walking. Tut tut, but worked out that in the whole this totalled less than 4 mins) I put my ipod shuffle on at the halfway point, and to be honest I think the music got me round. I knew that each km was less than 2 songs, so the kms just kept passing on by. It was a brill investment, and great idea for anyone who battles those internal demons when running a marathon.
My favourite section was the last 12km along the sea front. Great support helped with people shouting your name and words of encouragement (mostly in Spanish, German or English!). There was a short section here along some boardwalk planking that was a wee bit rotten, so interesting with tired legs. The views and nice pathway really helped me on the final section, and knowing that every step you took was getting you back closer to the finish. On the last km Jane B, David, Ian, Jane and Brian were all shouting me on - this was fantastic and a real boost to the end. The benefit of being last in the group to finish = more people you know to cheer you on!!!
So I didn't quite make the goal time, but to be honest by halfway I think finishing was the only goal I had and 5 hours sounded alright to me! I did 4.38 which is nearly 6 mins faster than the last marathon so have to be pleased with that. Legs were in agony afterwards, and I decided I wasn't an endurance athlete..... although I was a day quicker than Jane is saying maybe I'd do another....one day
So a bit of a mixed one for me - all about the fact that I wasn't mentally ready at the time I think and needed to get my head in a positive zone more. Although know now that I can do it even if brain is saying I can't so think that's positive....
The race itself had some great touches - your name was printed on your race number so everyone could cheer you on which was brill. As soon as you handed your race chip in they printed a certificate out with your time, and your 10km, halfway, 0-30km and second half times on it. We had paid for medal engraving so immediately got our names and times printed on our medals also. And I loved having the distances in kms. Mentally easier ticking these off, and once you got to 30km you knew you would make it but this is actually only 18 miles which is normally the hard part in a marathon when marked in miles.
A good one to do if you like running in the sun! now onto the diet after all our post race recovery eating and drinking.....
Theresa
Posted by A middle aged runner at 10:59 No comments: